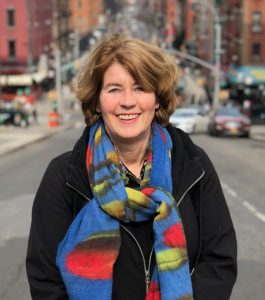 Birgit Meyer (PhD in anthropology, 1995) is professor of religious studies at Utrecht University, Netherlands. Trained as a cultural anthropologist, she studies religion from a material and postcolonial angle, seeking to synthesize grounded fieldwork and theoretical reflection in a multidisciplinary setting. Recent publications include Sensational Movies. Video, Vision and Christianity in Ghana (2015), Creativity in Transition. Politics and Aesthetics of Cultural Production Across the Globe (2016, co-edited with Maruška Svašek), Taking Offense. Religion, Art and Visual Culture in Plural Settings (2018, co-edited with Christiane Kruse and Anne-Marie Korte), Sense and Essence. Heritage and the Cultural Construction of the Real (2018, co-edited with Mattijs van de Port) and Figurations and Sensations of the Unseen in Judaism, Christianity and Islam (2019, co-edited with Terje Stordalen). In 2015 she received the Spinoza prize from the Netherlands Foundation For Scientific Research and the Academy Professor Prize from the Royal Netherlands Academy of Arts and Sciences, thanks to these awards she could set up the research program Religious Matters in an Entangled World (religiousmatters.nl).

The beginning of the twenty-first century has seen one of the largest and most prolonged mass migration of people as these first two decades have seen continued global conflict primarily around resources of land and wealth. Going forward it is predicted that questions of food security and water will be the key issues facing humanity in the twenty-first century.

Questioning the relationship between religion and resources, particularly in the form of economies was central to early religion studies scholars such as Marx and Weber. As we come to the end of the second decade of the twenty-first century some of the most important challenges facing the global world, and Africa in particular, is the economy of land, food, wealth and poverty. It therefore seems fitting to revisit, particularly from a decolonial perspective, and in the light rapid technological changes, what the relationships might be between religion and economy in Africa and beyond.Economy is broadly understood as the structure, process or conditions under which resources are produced, distributed and consumed. Therefore economy is not limited to material resources but influences all spheres of life. Today much attention is given to the economy of politics, knowledge and gender, as resources in themselves and as being affected by the material resources.

Since the explosion of Deep Learning in Artificial Intelligence (AI) a new form of economy has emerged in the form of surveillance economy. Simply put the way most companies such as Facebook and WeChat make money is through the big data they collect on their clients’ behaviour and this is what they then sell. The age of the Fourth Industrial Revolution and the AI that underpins it, changes the way in which computers can do things two critical issues are emerging that humanity will have to grapple with going forward: 1) what does it mean to be human and what is my purpose? 2) how will people survive or thrive when millions of jobs are lost to computers? Both of these questions, which societies and individuals will be asking more and more, have the potential to impact the role of religions in the world of the 4th Industrial Revolution.

When we look at religion in the twenty-first century three issues seem to dominate discussions. First are questions of religion and political economy. We see this particularly in India with the rise of Hindu nationalism, in Africa with conflicts between Islamic and Christian political leaders and in the Middle East around questions of land and secular or religious political rule. Second are questions on the relationship between capitalism and religion. This is of particular concern when we examine Christian and Muslim forms of prosperity theologies. Third are questions of sustainable development and religion.

We would welcome papers examining, but not limited to the following themes:

Preference will be given to papers that examine one of these or related themes to the African context.The second volume of the 2019 edition of the Journal for the Study of Religion will be an edited collection of papers on this topic.

Please ensure that your abstracts include the following:Proposals for papers should include:

Proposal for a panel:

Acceptance of proposals notification: 1 April 2019 Confirmation of attendance: 1 May 2019

Recommended accommodation
Rates negotiated with these recommended guest houses are inclusive of breakfast.Please indicate that you will be a participant at the ASRSA Conference when you make a reservation at these guest houses.

You may also wish to search for other possibilities in the Muckleneuk area in Pretoria at
https://www.safarinow.com/destinations/muckleneuk/hub.aspx  and at www.booking.com

Please email your interests to Prof Michel Clasquin-Johnson at clasqm@unisa.ac.za. Depending on interests expressed, Michel will arrange a post-conference tour for Friday 6 September.